The Hawaiian monk seal is an endangered species of earless seal in the Phocidae family that is endemic to the Hawaiian Islands. They are solitary animals, like some monks.

Today, Hawaiian monk seals are endangered &, although many protection efforts are in place, their numbers are believed to have fallen more than ten percent per year since 1989. Photographed from Secret beach at the KoOlina Resort, Waianae Coast, Oahu, Hawaii 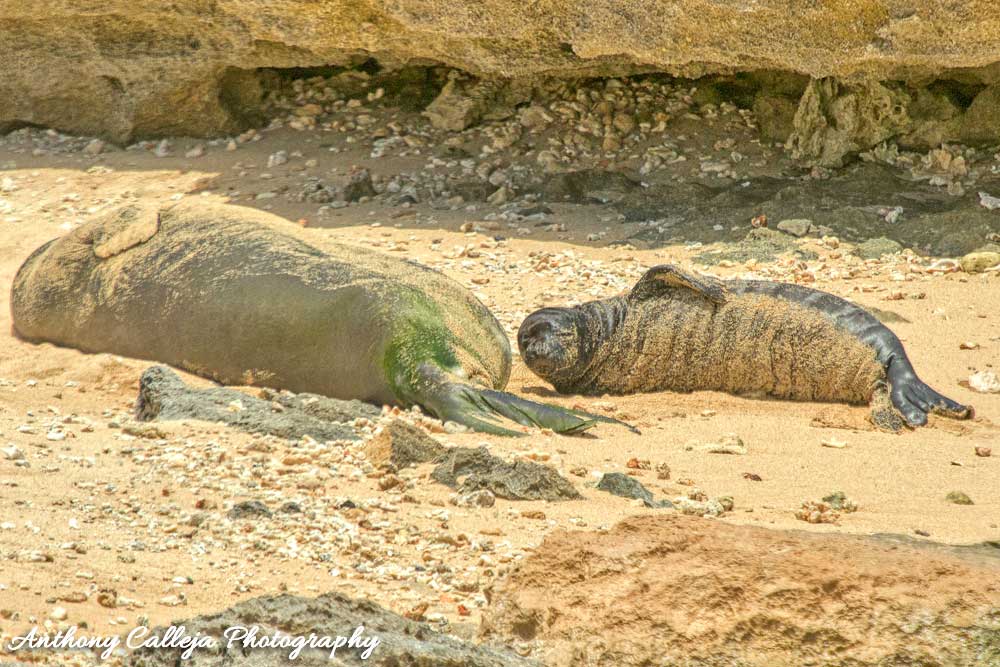 Hawaiian Monk Seal Honey Girl gave birth to her 12th Pup on the 8th of May 2019 - North Shore, Hawaii 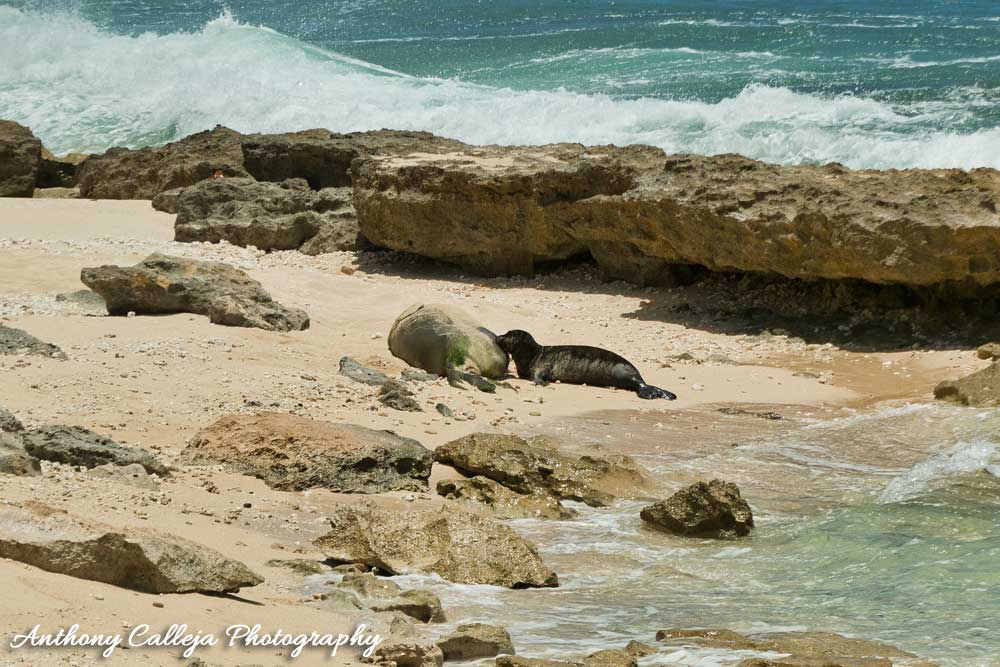 things about the Hawaiian monk seal you need to know

Just because you shouldn’t get close to them doesn’t mean you can’t get to know them.

They have many names

Although referred to in English as the Hawaiian monk seal for its solitary nature and the folds on its neck that resemble a monk’s cowl, there are a few different names in Hawaiian for our blubbery buddies. Ilioholokauaua (dog running in rough seas) is the name most often associated with the mammal, however other names include na mea hulu (the furry one) and iliokai (seadog).

You won’t find them anywhere else in the world

Archaeological and historical data shows that the Hawaiian monk seal has inhabited the Hawaiian Islands for the past several hundred years. However, evidence suggests that they may have come here 3.6 to 11.6 million years ago through the Central American Seaway, a once existing channel between North America and South America. Along with the hoary bat, they’re one of the two mammal species endemic to Hawaii, meaning that they are only found in the Hawaiian archipelago and nowhere else in the world.

There’s only one other monk seal species

Don’t let their cool demeanor and adorable offspring fool you, Hawaiian monk seals are in a perilous situation. Currently an endangered species on the IUCN’s Red List of Threatened Species, the remaining population is estimated at 1,272. However, things are looking up for Hawaii’s state mammal: There’s been an increase of pups being born in the main Hawaiian Islands such as Oahu, Kauai and Molokai.

Give them some space

With an increase in Hawaiian monk seal population in the main Hawaiian Islands, it’s a good idea to remember they need their space. The National Oceanic Atmospheric Association (NOAA) recommends keeping a distance of 150 feet, allowing the seal to remain undisturbed. Mother seals can be extremely protective of their pups, so for the safety of the seal and yourself, give the pair ample space and leash any of your pets.

Hawaii Sealife Photography - Its grey coat, white belly, and slender physique distinguish them from their cousin, the harbor seal (Phoca vitulina). The monk seal's physique is ideal for hunting its prey: fish, lobster, octopus and squid in deep water coral beds. When it is not hunting and eating, it generally basks on the sandy beaches and volcanic rock of the Northwest Hawaiian Islands. The Hawaiian monk seal is part of the family Phocidae, being named so for its characteristic lack of external ears and inability to rotate its hindflippers under the body. The Hawaiian monk seal has a relatively small, flat head with large black eyes, eight pairs of teeth, and short snouts with the nostril on top of the snout and vibrissae on each side. The nostrils are small vertical slits which close when the seal dives underwater. Additionally, their slender, torpedo-shaped body and hind flippers allow them to be very agile swimmers. Adult males are 300 to 400 pounds (140 to 180 kg) in weight and 7 feet (2.1 m) in length while adult females tend to be, on average, slightly larger, at 400 to 600 pounds (180 to 270 kg) and 8 feet (2.4 m) in length. When monk seal pups are born, they average 30 to 40 pounds (14 to 18 kg) and 40 inches (1.0 m) in length. As they nurse for approximately six weeks, the grow considerably, eventually weighing between 150 to 200 pounds (68 to 91 kg) by the time they are weaned, while the mother loses up to 300 pounds (140 kg). Monk seals, like elephant seals, shed their hair and the outer layer of their skin in an annual catastrophic molt. During the most active period of the molt, about 10 days for the Hawaiian monk seal, the seal remains on the beach. The hair, generally dark gray on the dorsal side and lighter silver ventrally, gradually changes color through the year with exposure to atmospheric conditions. Sunlight and seawater cause the dark gray to become brown and the light silver to become yellow-brown, while long periods of time spent in the water can also promote algae growth, giving many seals a green tinge. The juvenile coat of the monk seal, manifest in a molt by the time a pup is weaned is silver-gray; pups are born with black pelage. Many Hawaiian monk seals sport scars from shark attacks or entanglements with fishing gear. Maximum life expectancy is 25 to 30 years. Hawaii Sealife Photography 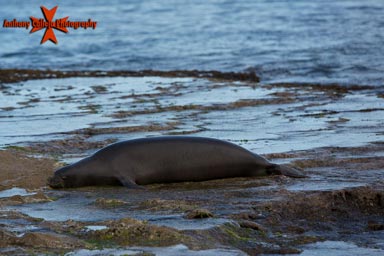 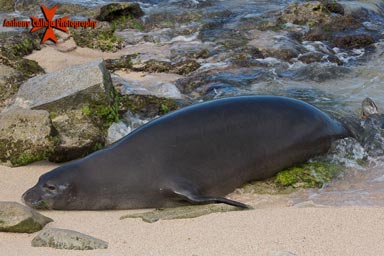 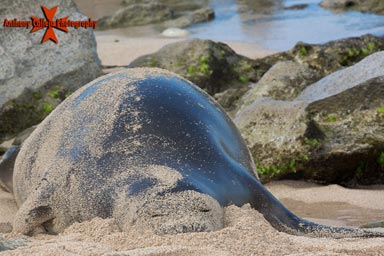 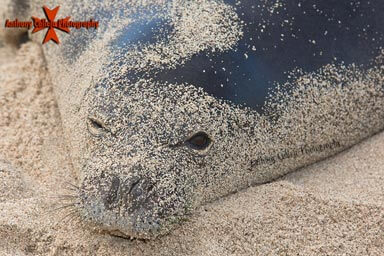 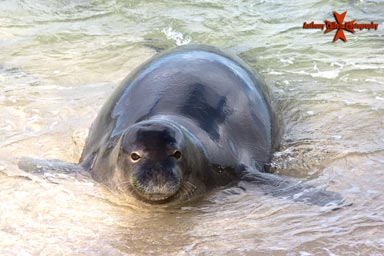 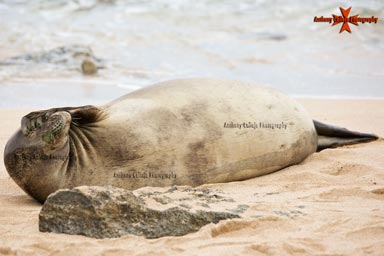